I have always wondered why René liked this movie so much?????

I am starting to think that I could easily write a book about all the weird things that René and I have done, witnessed, thought about, etc. in our lives.

Not sure if it would be a comedy, horror, drama, or pop-up book! I am leaning towards a pop-up book though!

For the sake of the marriage….I won’t say who is who.   LOL

So I just want to send a SHOUT OUT to the love of my life…and my absolute best friend.

She is one of the kindest, most caring, compassionate persons I have ever known.  How I got lucky enough to snag her…I have no idea.

But she cares so much for EVERYONE and would literally give you the shirt off her back if you needed it.  (maybe not in public…but you know)

So…one of the things that I hate the most about Menieres, is that I am no longer able to drive.  I LOVED TO DRIVE!  There were times that I was happy that I didn’t have to (usually when I was asleep) but for the most part…I wanted to do the driving.

Now, it was recently brought to my attention (from my Mom) that I should appreciate the fact that she and Rene are willing to drive me around…and that I should quit being a backseat driver.

And although this is true…there are stories folks!  Stories about her driving that would scare a ghost from haunting their own home.  And Rene would be the first to admit this.  Well…maybe second after me.  LOL  But I do appreciate the fact that she is willing to drive me everywhere…just like I know that she appreciates me being “The Automatic Warning System” in the car since we can’t afford a fancy one that is like a psychic robot on wheels.

Never-the-less…I came across the above photo…and it “spoke to me” in a way that just felt right!  Like I should post it!  Like I should take the chance of pissing off my wonderful wife who does everything for me. Because no matter what…I always speak the truth!  LOL

Catch You In The Backseat! 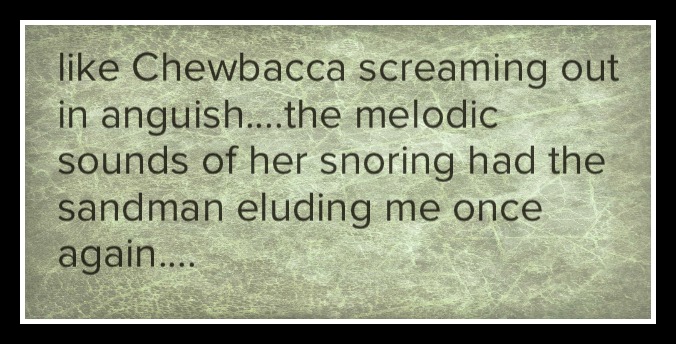 Now…I know that I snore….

But MAN….does René have a set of pipes on her when she is asleep!

And right now…she is using a CPAP machine…so I know that her snoring cannot be helped…So I do feel bad posting the above quote.

We have literally watched every episode of Psych….A MILLION times.  Maybe twice.  I’ve heard it both ways!  Both anyway…we are so freaking excited that they are coming out with a new Psych Christmas Movie!!  WHAAAAAAAT??  That’s right!  Now all we have to do is…..WAIT FOR IT………………………….

USA Network has released another Psych: The Movie promo to get you excited for the forthcoming reunion. Sure, it doesn’t reveal any new plot details, but who cares? The 1-minute teaser boasts that classic Shawn and Gus banter that we’ve all missed in the past three years.

In the spot, which was released last night, James Roday and Dulé Hill go back and forth about the particulars of the two-hour holiday movie: Shawn (Roday) claims it will be shown it theaters (it won’t be); Shawn says it’ll also be in 3D (false, again); and Shawn also declares that Brian Goosring, a.k.a. Ryan Gosling, guest-stars in it (alas, we wish). The most interesting thing about the promo, however, is that it Roday and Hill refer to each other by their characters’ names, which suggests that Shawn and Gus have become even more self-aware in the intervening years and now know that they’re characters on a TV show.

In the end, our favorite sleuths reach a consensus on the following details: Psych: The Movie will air on USA Network, and not in 3D (thank god), this December.

So…for awhile now…René has been going to Yoga classes with her sister Casey.  There have even been times when she has gone by herself.

I am totally impressed with her about this!  This is not something I think I could ever do.  I do not have the patience or the attitude to do yoga…even if I was healthy enough to do it.  And I think it has had a really good positive affect on her.

Not only physically…but mentally.  She not even has a sign next to the bed that says “Start each day with a grateful heart.”  Now…this is someone who wakes up on the wrong side of bed….every day of her life!  NOT A MORNING PERSON…if you catch my drift.  But since starting yoga…she has truly improved her morning attitude.

And the other day…she took a bad spill outside hitting the concrete really hard (bad abrasion and concussion – had to go to the ER)…but while waiting for her mom to come get her…she used her Yoga breathing techniques to calm herself down.  AWESOME!  I am just so proud!

Now…I still give her a hard time about some of the names of the poses, etc.  Doggie Style and Xena Warrior Princess and what not…but I truly am so proud of her!

Unfortunately…I don’t get to go see her in action…and it is hard for to show me the poses and workout routines here in the house….so I found the following…and this is what I imagine every time I know she is at Yoga….

Did I mention I was proud of her???   Still won’t keep me from getting in trouble!  LOL

But that is my job in the relationship!  LOL  Why do you think she needs to go to Yoga!?

Something every man should be lucky enough to tell his wife!

Not my wife…their own wife!

January 26 is Spouse’s Day, a day to celebrate your spouse, better half, or significant other. The unofficial holiday encourages people to let their spouses know how much they are loved, respected, and appreciated.

The holiday is also known as National Spouse’s Day in the United States.

…that Denmark was the first country in modern times to recognize same-sex marriage in 1989?